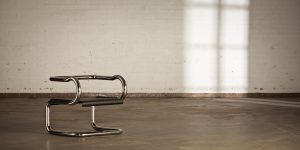 During 1970 – 71, Timo Sarpaneva designed a series of tube furniture of which miniature models were prepared on the scale 1/10. The designs never ended in production as Sarpaneva was fully occupied with a large order from Rörstrand. The furniture was also utopistic in terms of its production methods and would have posed a real challenge to the tools used in the 1970s. The strength of the steel tube and the bending curves are a combination that is still very difficult to produce.